Yeah, yeah, yeah. I love pho. I’m telling you guys, I could eat this meal for breakfast, lunch, snack and dinner. I digress…

You might think, pho is just easy to throw together, after all, what could be so hard about it? All it looks like is broth, chicken (or beef, but I always go for the ga) and noodles. So, basically a Vietnamese chicken noodle soup right? Wrong.

Pho is complex. The best pho broth comes from beef knuckles, toasting the spices, charring onion and ginger under the broiler, yellow rock sugar (as opposed to white sugar) and rice noodles.

I recently got a craving for pho so plugged in the term to my handy app, Yelp–which is my best friend. It took me across the Ravenel Bridge and all the way down, just before hitting Isle of Palms.

I arrived in a shopping center, where I was greeted with a sign noting the correct pronunciation of Mi Xao (pronounced ME Sow). I was surprised to see the small dining space, as most of their customers are there for take out.

I am a huge fan of the summer rolls. They were delicate and refreshing. 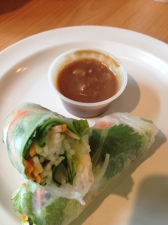 An example of the beef pho. It reminded me of a hot pot dining experience because the meat cooked in the hot broth while dining.

Chicken Pho (Pho Ga). If there is such thing as a pho broth sommelier, I think I am on my way to becoming one. This pho broth was slightly sweeter than other phos I’ve had. Perhaps the chef used more cardamon, fish oil or yellow sugar.

Mi Xao proved it is possible to find good pho in the south.

Who I would take as my date: A Southern pho lover

View all posts by Corianna

Corianna is a 20-something  who is constantly packing her suitcase and licking her lips in anticipation of the next destination that will further her love of food, wine and travel.